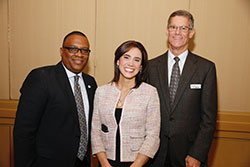 On May 31, our partners at Hyundai Motor America hosted a dynamic luncheon, highlighting its Employee Resource Groups, particularly the work of the Amigos Unidos ERG. Cristina Antelo also had the opportunity to meet with President & CEO of Hyundai Motor America, David Zuchowski, for a productive discussion on CHCI’s work in promoting diversity in the workforce. The day’s events concluded with an evening reception in Newport Beach bringing together key local leaders.

On June 1, The Coca-Cola Company hosted a leadership reception to increase awareness about CHCI’s history, mission, HHM events, and other critical initiatives to key prospective partners. The reception was attended by CHCI Chair Rep. Linda T. Sánchez, Rep. Lucille Roybal Allard, and Rep. Pete Aguilar, who underscored CHCI’s continued efforts to Educate, Empower, and Connect the next generation of Latino leaders. CHCI is excited to build on the momentum from the California tour with our new President & CEO, Domenika Lynch upon her arrival on July 1st.

CHCI would like to recognize Hyundai Motor America and The Coca-Cola Company for their continued support, and for convening these powerful gatherings between local leaders and members of the CHCI leadership.