CHCI and its Alumni Association (CHCI-AA) are proud to announce CHCI Alumna Susan Santana (1995-1996 Public Policy Fellow) will receive the 2017 Medallion of Excellence for a Distinguished Alumnus during this year’s Hispanic Heritage Month events in Washington, D.C. The CHCI Alumni Association selected Susan in recognition of her tireless advocacy of CHCI, her willingness to mentor CHCI program participants and other alumni, and her dedicated service on the CHCI Board of Directors. 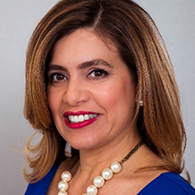 The Distinguished Alumnus Award recognizes the exceptional professional achievements of CHCI Alumni and their commitment to the Latino community. This annual award showcases the positive outcomes of CHCI’s programs and the prominence of its alumni by example.

Susan Santana serves as Assistant Vice President, Federal Relations for AT&T. In this capacity, Susan is responsible for representing AT&T’s legislative interests before the U.S. Congress on matters related to technology, internet, taxes and corporate diversity issues. Prior to this role, she served on the External Affairs team of AT&T, developing and managing long-term strategic relationships with key constituency groups, especially the Hispanic segment. Previously, Susan served as Government Affairs Counsel for Dell Inc. Prior to going in-house, she practiced law at Holland & Knight in Washington, D.C., as well as Baker and McKenzie in San Diego.

She received a double bachelor’s degree from the University of California at Berkeley, and earned her law degree in from UCLA School of Law. Susan’s involvement in the community has been extensive including board service and leadership positions for the Congressional Hispanic Caucus Institute (2003-2008), Congressional Hispanic Leadership Institute, the National Association of Latino Elected Officials Education Fund, and the Hispanic Lobbyists Association in Washington D.C. In addition, she has served as past president of the Hispanic Bar Association of D.C. and currently serves on the board of AT&T’s DC HACEMOS (Hispanic/Latino Employee Group) and the American Red Cross, National Capital Region.