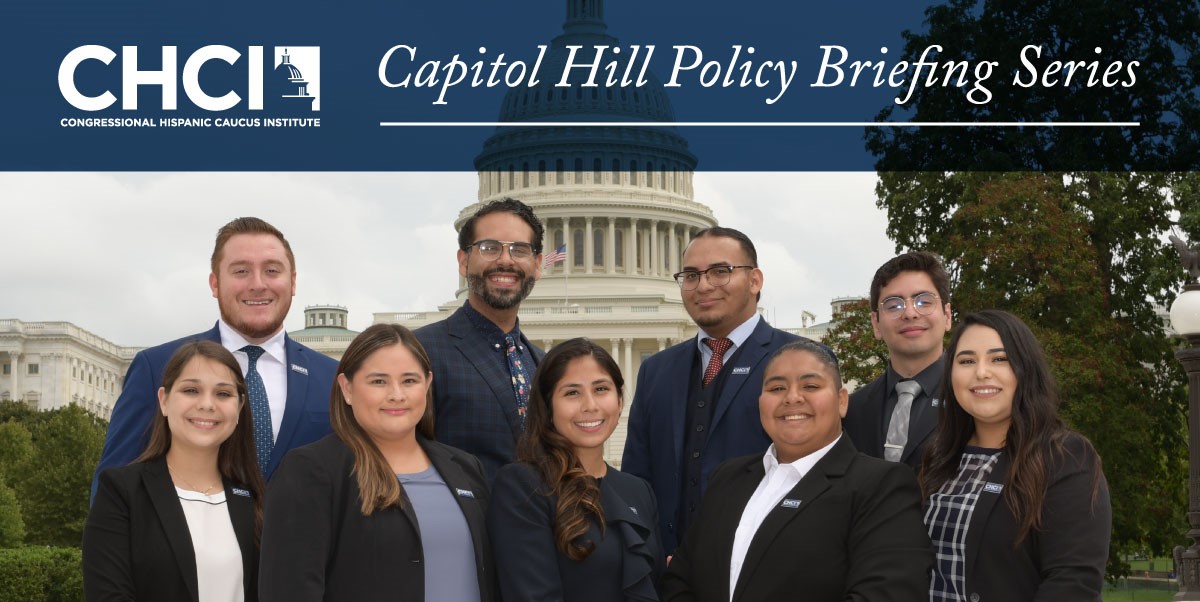 CHCI Is Proud To Invite You To Our 2020 Capitol Hill Policy Briefing Series!

Join us for public policy round-table discussions comprised of Members of Congress, congressional staffers, public policy experts, and national leaders, tackling some of the most pertinent issues affecting the Latino community. Each panel is organized and moderated by CHCI Graduate Fellows.

RSVP FOR DAY ONE

For more information on the sessions, select the + symbol in the dropdown menu below.

9:00-10:15 a.m. - High Costs Of Housing And Its Effect on Food Security In Minority Communities

Description:
Housing costs have been on the rise for many years and have put tremendous pressure on vulnerable U.S. households to make ends meet. As a result, they often have to choose between housing and nutrition, among other expenses, which have major implications for health outcomes. Minority communities are especially vulnerable to the unexpected consequences of high housing costs in the current political climate. This panel will explore the affordable housing crisis and its connection with poor nutrition in minority communities, and discuss possible solutions.

Description:
Discrimination impacts all facets of Transgender and Gender Non-Conforming (TGNC) livelihoods. Currently there is a lack of legal protections at the federal level, and across 26 states in the United States, based on sexual orientation or gender identity. In the face of this, TGNC people experience high rates of poverty, harassment, violence, poor health, limited job opportunities, homelessness and isolation. One major aspect that is not receiving the attention it needs is how this systemic discrimination ultimately limits access to proper nutrition, which will have long-term effects on the TGNC community if it goes unresolved. Join us and our panel of experts as we discuss the impact of discrimination and poor nutrition on TGNC people and what policies and programs are needed to overcome these challenges.

For more information on the sessions, select the + symbol in the dropdown menu below.

Description:
Central Americans from the Northern Triangle region (consisting of El Salvador, Guatemala, and Honduras) have been detained at an alarming rate since 2012. This group of people has fled their countries to improve their lives in the U.S. However, those who are detained are sent to privately-owned detention facilities that typically fail to provide acceptable living conditions, which will likely have a long-term impact on the lives of these people. U.S. Immigration and Customs Enforcement (ICE), the federal law enforcement agency responsible for the care of the detainees, has not performed its duty to ensure proper care. A major issue detainees have faced is poor nutrition due to the types of food served. Many concerns have been raised by immigrant rights groups about this, which led the U.S. Department of Homeland Security Office of Inspector General to conduct inspections. These inspections have shown violations of ICE’s own National Detention Standards, however ICE has not taken the steps needed to resolve this problem. Join us and our panel of experts as we discuss first-hand experiences inside detention facilities, the detrimental effects poor nutrition can have on vulnerable detainees, and how we can advocate to improve conditions for these people.

Description:
In August 2019, the current administration published final changes to the public charge rule. Unlike the previous public charge rule, legal immigrants who utilize nutrition assistance programs would be potentially classified as “public charges,” thus making their pathway to legal permanent residence and citizenship more difficult. These changes have resulted in a “chilling effect” among Latinx immigrant communities, where families unenroll from nutrition assistance programs irrespective of immigration status. Regardless of the outcome of litigation on the rule, the “chilling effect” has still sowed seeds of fear among families from taking advantage of benefits their children are entitled to as U.S. citizens. A lack of access to nutritious food through assistance programs may lead to negative health and educational outcomes in the long term for these children. This panel will discuss the impact of this rule on children’s health and access to nutrition assistance benefits.

1:00-2:15 p.m. - The Health Impacts of Anti-Immigrant Policies on Children of Immigrant Families

Description:
Anti-immigrant policies disproportionately impact the health of children of immigrant families. One of their major effects is trauma, stemming from experiences with racism, poverty, and insecurity. This can have negative and lasting effects on children’s physical, mental, and behavioral health. Preventing these negative effects is critical to ensuring children’s health, wellbeing, and future opportunities. Join us and our diverse panel of experts as we discuss the effects of anti-immigrant policies on children and ways to improve the health and wellbeing of children in immigrant families to promote health equity.