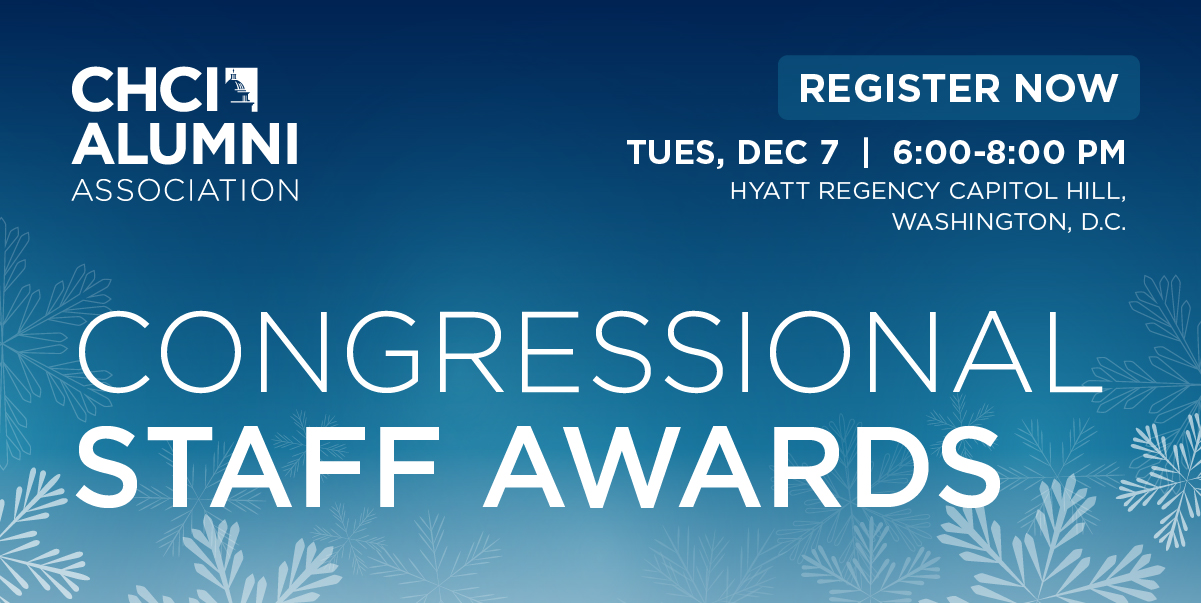 The CHCI Alumni Association (CHCI-AA) Congressional Staff Awards – formerly known as the Chief of Staff Reception – were launched in 2015 to recognize Congressional Staff who have demonstrated their commitment to promoting diversity on Capitol Hill.

In 2020, CHCI and CHCI Alumni Association expanded the Award criteria to allow for the recognition of leaders across Congressional staff, including Chiefs of Staff, Legislative Directors, and others. View past honorees.

Join CHCI and the CHCI Alumni Association on Tuesday, December 7th, to honor three esteemed Congressional staffers, and recognize one former Congressional staffer for their dedication in advancing diversity on Capitol Hill and their pivotal role in cultivating opportunities for other emerging Latino leaders, especially CHCI Alumni. This award presentation will be followed by a networking reception.

Alma Acosta has been in public service on Capitol Hill since 2013. In that time, her accomplishments have included developing strategy related to appropriations, amendments, and Committee work; organizing 10+ Congressional delegations; and serving as Executive Director of one of the largest caucuses in Capitol Hill for over five years.

A few of the many successes under Acosta’s tenure have included the introduction of the landmark Health Equity and Accountability Act (HEAA), passage of the National Museum of the American Latino Act, and legislation to protect Dreamers, TPS-holders and farmworkers.

Acosta’s passion for her community has no bounds. In her personal capacity, she founded a political appointee webinar series and resume bank starting in August 2020, which trained Latino leaders on the appointment process, and had an average live webinar audience of 100+ viewers each week and 600+ resumes which were submitted to the Biden-Harris administration for consideration on a rolling basis.

Gerardo Bonilla Chavez is the Chief of Staff for Rep. Alexandria Ocasio Cortez (NY-14) and her former Legislative Director. Gerardo was a 2011-2012 Public Policy Fellow, placed at U.S. Senate Committee on Small Business and Entrepreneurship, and the Department of State, Bureau of the Western Hemisphere Affairs Gerardo is from Bakersfield, California, but his home state is Minnesota. He attended the University of Minnesota-Twin Cities for both his undergraduate and postgraduate degrees. He holds a master’s degree in advanced economic policy analysis. Before working with Rep. Ocasio-Cortez, Gerardo held several Congressional staff positions, including the role of Senior Economic Advisor to the House Small Business Committee in 2019, and was a political appointee during the Obama Administration.

Grisella M. Martinez serves as Chief of Staff to Rep. Ruben Gallego (AZ-07) and is a longtime and trusted resource for Members of Congress and their staff on both policy and political matters. Before joining Rep. Gallego she served as Vice President of Government Relations at the National Association of Broadcasters (NAB) where she represented radio and television broadcasters before Congress and within the media and telecom industry. Prior to joining NAB she was Policy Director for the House Democratic Caucus under Chairman Xavier Becerra (CA-34) following a career in immigration law and non-profit advocacy. Ms. Martinez holds an LL.M. from Washington College of Law at American University, a J.D. from Catholic University of America Columbus School of Law, and a B.A. in English and Political Science from James Madison University. Ms. Martinez is passionate about mentorship, advocating for diversity and inclusion, and supporting the fine and performing arts. She previously served on the Board of Directors for the Asian Pacific American Institute for Congressional Studies (APAICS) and the Advisory Council for the Congressional Hispanic Caucus Institute (CHCI). She is current Board Chair for GALA Hispanic Theatre in Columbia Heights, D.C.

THANK YOU TO OUR EVENT SPONSORS