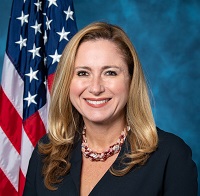 Like many Americans, Debbie Mucarsel-Powell immigrated to the United States from Ecuador as a young girl with her mother and sisters in search of better opportunities. She learned the struggles immigrants face at an early age when her mother worked double shifts while attending night school to learn English. At age 15, Debbie started helping her mother by working at a doughnut shop before school.

While working her way through high school and college, Debbie earned her Bachelor’s degree in political science from Pitzer College. She then gained her Master’s degree in International Political Economy from Claremont Graduate University while working as an office manager at a shipping company to make ends meet.

When she took her oath of office in 2019 to represent Florida’s 26th congressional district as the first Ecuadorian-American and first South American immigrant member of Congress, Debbie promised to protect and uphold the values that helped her succeed in America. After her father died in a senseless act of gun violence, Debbie became a strong advocate for gun safety legislation. She fights for universal background checks and a ban on assault rifles so that families don’t have to endure the tragedy hers did. Even before she was in sworn in, she became a member of the Gun Violence Prevention Task Force. From her first day, she has taken her place as a champion for gun safety, health care, immigration reform, the environment, and human rights.

Debbie also sits on the Transportation & Infrastructure Committee, where she advocates for South Florida on the Water Resources & Environment Subcommittee and Economic Development, Public Buildings, & Emergency Management Subcommittee. She is fighting for clean water and comprehensive responses to climate change.

Since her first day in Congress, Debbie has become a leading voice for regional stability in Latin America by advocating for the peaceful restoration of democracy in Venezuela.

Debbie spent years working at the College of Health at Florida International University, where she worked to grow programs that improve health care access for Floridians. In Congress, she will continue her fight to expand access to quality care and control skyrocketing costs. She believes we must continue to improve our health care system so families aren’t one medical bill away from bankruptcy.

Before becoming a member of Congress, Debbie worked for several non-profit organizations, including the Hope Center, Zoo Miami Foundation, and the Coral Restoration Foundation. She understands first-hand the immediacy of climate change, and the drastic actions we must take to invest in green energy, reduce carbon emissions, and protect South Florida from rising sea levels. She will fight for clean air and drinking water for all Floridians and restore the Everglades.

As a mother of three, Debbie is on the frontline, fighting for Florida’s families — whether that is fighting this Administration’s family separation policy, prioritizing equal pay, keeping our planet clean for future generations, or supporting gun safety. Debbie is honored to serve her community of South Florida.

Congresswoman Donna E. Shalala has spent her entire life fighting to improve the lives of…