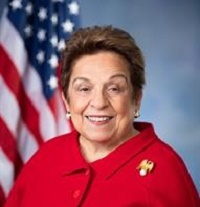 Congresswoman Donna E. Shalala has spent her entire life fighting to improve the lives of others, advocating tirelessly for women’s rights, civil rights, increased access to health care, better education and schools, and a clean, sustainable environment. She is proud to now represent Florida’s 27th District, which includes the City of Miami and surrounding municipalities in Miami-Dade County.

Donna was born and raised in Cleveland, Ohio. Her grandparents were migrants from Lebanon and moved to the United States to pursue the American Dream. Donna understands first-hand the hard work and dedication that defines the lives of immigrants trying to provide a better life for their family, as her grandparents and parents did for her and her twin sister.

Donna received her degree in history from Western College for Women and earned her Ph.D. from The Maxwell School of Citizenship and Public Affairs at Syracuse University. She served as President of Hunter College of the City University of New York from 1980 to 1987 and as Chancellor of the University of Wisconsin-Madison from 1987 to 1993.

President Carter tapped Donna to serve as the Assistant Secretary for Policy Development and Research at the U.S. Department of Housing and Urban Development. One of her major accomplishments was placing, in 1979, the first ever solar panels on the roof of the White House, exemplifying her long-standing commitment to protecting the environment and promoting the use of renewable energy before it was the mainstream thing to do.

Donna was appointed by President Bill Clinton to serve as the U.S. Secretary of Health and Human Services (HHS) where she served for eight years, becoming the longest serving HHS Secretary in U.S. history. During her tenure at HHS Donna fought to create, implement and oversee the Children’s Healthcare Insurance Program, currently covering over 7.6 million children throughout the country as well as doubling the budget of the National Institute of Health and securing the highest immunization rates in American history.

At the end of her tenure, a Washington Post article described her as “one of the most successful government managers of modern times.” In 2008, the Council on Excellence in Government named her one of the greatest public servants of the past 25 years.

From 2001 to 2015 Donna served as the President of the University of Miami. During her tenure, UM solidified its position among top U.S. research universities and raised billions of dollars in private support for student scholarships, academic and research programs and facilities.

In 2007, President George W. Bush handpicked Shalala to co-chair with Senator Bob Dole the Commission on Care for Returning Wounded Warriors, to evaluate how wounded service members transition from active duty to civilian society. Donna believes it is our duty as a nation to provide the best care for our women and men in uniform and support our veterans and their families.

In 2008, President George W. Bush awarded Donna Shalala the Presidential Medal of Freedom, our nation’s highest civilian honor where she was recognized for her, “leadership and determination to ensure that all Americans can enjoy lives of hope, promise and dignity.”

Donna is unapologetic in her love for South Florida’s natural beauty, its rich culture and its diverse people.