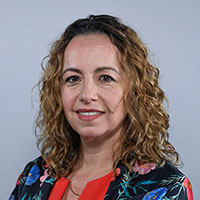 As Executive Director of the Latinos and Society Program, Abigail Golden-Vazquez runs a policy program whose goal is to improve understanding of the growing Latino community and increase awareness of its critical importance to the future of the United States. For 8 years prior she managed the Institute’s geographical (Africa, Central America, India, Middle East, and China.) and topical leadership initiatives (education and environment) that comprise the Aspen Global Leadership Network with the goal of stimulating a new generation of local leaders to play a greater role in the social and political development of their countries. As a Vice President at the Aspen Institute she is part of the executive management team working on strategy and representing the Institute publicly.

Abigail joined the Aspen Institute from the German Marshall Fund (GMF) where she was Director, External Relations and a Sr. Manager responsible for partnership development, congressional relations, and public outreach as well as strategy. From 2000-2002, Ms. Golden-Vazquez worked with USAID in Honduras as Communications Specialist during the post-Hurricane Mitch reconstruction effort. Prior to that she was Vice President, Public Affairs Group for Ruder-Finn, a top-five New York public relations firm. She was a term-member at the Council on Foreign Relations until 2008, is an International Career Advancement Program (ICAP) Fellow, is a founding member of the ICAP Association and is a 2013 National Hispana Leadership Institute Executive Fellow Abigail holds a B.A. in Political Science and Spanish from Amherst College and an M.A. in International Relations and Latin American Studies from the Johns Hopkins University School of Advanced International Studies.