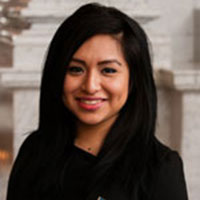 Agustina Perez is a first generation Mexican-American and the first woman in her family to graduate from college. She attended Marymount Manhattan College and graduated with degrees in political science and international studies major. Agustina was born and raised in New York City’s “Spanish Harlem.” Growing up in a very diverse community, Agustina pictured herself from a young age being the voice of those who could not be heard; whether because of gender, race, ethnicity, nationality, or any reason.

In 2011, she became one of five fellows for the Civic Leaders of Tomorrow Fellowship Program, sponsored by Borough President Scott Stringer. The Fellowship is designed to promote future leaders in public policy and immigrant rights advocacy as well as to advance the goals of the DREAM Act. In 2012, she became a fellow for the Young People For (YP4), a yearlong leadership development program in creating positive social change in diverse communities by increasing civic participation and ensuring that young people are heard in our political system. During the 2012 Presidential Campaign, Agustina and other YP4 vote organizers mobilized diverse communities throughout the states to go out and vote, sharing knowledge about the political process and ensuring thousands could cast ballots during the elections. She has interned with the Urban Justice Center; working with the Street Vendor Project, a membership-based small-business advocacy organization.

A member of the 2013 Spring Internship class of CHCI, she was placed in the office of her home state’s Senator Kirsten Gillibrand. It became a yearlong experience, after working for the Senator in D.C she was asked if she wanted to join staff in NYC. She was able to get both the policy and the grassroots perspective of a federal legislator’s role. She worked on substantial policy in DC and used that during her time in NYC to update DC staff on issues pertinent to NY constituents. Her primary policy focus was immigration, and Agustina gladly joined the immigration case work team in NYC.

Agustina has a long history of civic engagement. From an early age Agustina saw the unjust immigrants faced and is still facing in NYC. Agustina is currently involved in helping the undocumented community be aware of their rights in regards to ICE. Agustina has held “know your rights,” sessions. On February 21, 2019 alongside City Comptroller Scott Stringer, Assembly Catalina Cruz, and others, was able to share her personal story with NYC Press conference with dealing with ICE. Agustina is committed to helping the undocumented community with informative sessions.
Agustina keeps involved with a variety of non-profits organizations such as the Mexican Coalition. Agustina is the current secretary for the NYC CHCI Board. Aside from being devoted to helping the immigration community, Agustina focuses on helping foster care youth further pursue a higher education. Agustina mission is to help improve the quality of life for the Latino community through education.

To Agustina, becoming part of the NY CHCI Alumni Association is an opportunity to continue building on the political and economic success that Latinos slowly but surely have attained. She looks forward to working with the board and with NYC alumni to continue developing the Latino Leaders of tomorrow, and to provide support to those of today.