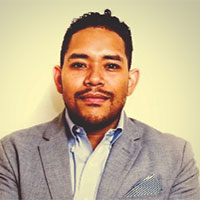 Amilcar Guzman is the Evaluation and Outcomes Director at the League of Women Voters where he leads the organization’s Evaluation Department. In this role he partners with senior leadership at the League to establish cross-cutting evaluation priorities and examines the organization’s programs and practices. Prior to joining CASA, Amilcar worked in education policy, research and analysis at numerous Washington, DC based organizations including the Data Quality Campaign, National Council for Community and Education Partnerships and the Council of the Great City Schools. As a CHCI Fellow, Amilcar split his time between the White House Initiative on the Educational Excellence of Hispanic Americans and on Capitol Hill.

Prior to serving as National President of the Alumni Association, Amilcar as President of the Washington D.C. Chapter and as the Vice-President (2012-2014) and Programs Coordinator (2010-2012) of the CHCI Alumni Association National Board. In addition, Amilcar has served on the board of the Latin American Youth Center (Associate)and of the Young Education Professionals. He has also taught as an Adjunct Professor at the University of Maryland, Trinity Washington University and the University of the District of Columbia.

For his service in the community Amilcar has received the President’s Volunteer Service Award and was named as 40 under 40 leader by Prospanica. Amilcar holds a B.A. in Psychology and Sociology from Lycoming College and an M.A. in Educational Leadership and Policy from the University of Maryland, College Park. Currently, he is pursuing his Ph.D. in Educational Leadership and Policy (Higher Education) at the University of Maryland, College Park. His research and writing on K-12 and postsecondary education has appeared in the Harvard Journal of Hispanic Policy, Huffington Post, About Campus and Latino Rebels. He has received fellowships from the U.S. Department of State, Hispanics in Philanthropy, and the American Association of Hispanics in Higher Education the U.S. Spain Council and the Center for American Progress.