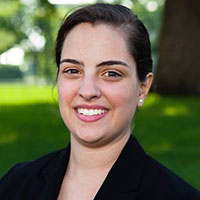 Ana joined CHCI in 2013 as a congressional intern and has since dedicated herself to serving her Miami community through various organizations. While attending the University of Miami, Ana was heavily involved in non-profit work benefiting vulnerable and overlooked populations as the director for the local chapter of Camp Kesem. Upon earning her bachelor’s degree in 2014, Ana became an AmeriCorps member with City Year Miami and committed herself to social justice by mentoring and co-teaching at-risk youth at a high-need school in Homestead. After completing her year of service, Ana remained focused on educating underserved students. She taught kindergarten at an under-resourced school in North Miami for two years before returning to higher education to earn a master’s degree. Currently, Ana is a full-time graduate student earning her M.A. in Communication Sciences & Disorders from the University of Florida. She has continued her involvement in civic engagement and leadership through the Johns Hopkins AICGS Transatlantic Exchange Program and looks forward to her new role with the CHCI-AA South Florida Chapter.