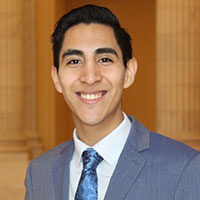 Antonio “Tony” Hernandez was born in Texas, raised in Mexico, and returned to the U.S. when he was 16 years old. When he enrolled in high school, some of his school credits did not transfer, and he was pushed a year back. Tony participated in an after-school program, called A+, to recover his credits. Meanwhile, he took college-entry exams to enroll in Advanced Placement and community college courses to make up for the lost time. The next year, he graduated with honors and earned the Gates Millennium Scholarship to attend college. He earned two bachelor’s degrees, one in government and one in rhetoric and writing, from the University of Texas at Austin’s Liberal Arts Honors Program in 2018. In college, Tony tutored students on and off campus, mentored incoming freshmen, conducted research, studied abroad in Paris, France, interned in Washington D.C. on Capitol Hill, later worked as a press assistant for Senate Democratic Leader Chuck Schumer. Tony currently works for TIME’S UP as a communications associate, and is passionate about public service and hopes to have a positive impact on his community and the world. For the 2019-2020 term, Tony served as the DC Chapter’s Director of Membership.