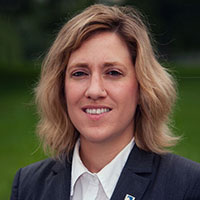 Carolina Rizzo is an international human rights professional with over a decade of experience in the field. Originally from Uruguay, she arrived in DC in 2008 for an internship with the United Nations and never left. She’s held several internships in non-profit organizations, a federal court, a think-tank and the Senate, and spent a year after law school clerking for the Hon. Marielsa A. Bernard in the Montgomery County Circuit Court. In 2013, Carolina was selected by CHCI as the law graduate fellow, completing half of her fellowship at the Tom Lantos Human Rights Commission in the House Foreign Affairs Committee and the other half at the Department of Homeland Security’s Office of Policy. She has been at the Department of Labor since 2014, where she currently serves as International Labor Advisor for Trade Policy in the Office of Trade and Labor Affairs. Carolina earned degrees from the University of Michigan-Ann Arbor and the American University Washington College of Law. She is passionate about mentoring, traveling, and food.