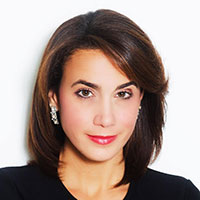 A fierce believer in Thomas Edison’s, “Everything comes to h[er] who hustles while [she] waits,” Cristina is a senior Democratic strategist and serves as Ferox’s Chief Executive Officer. Cristina has spent more than a decade representing multinational corporations with her trademark hustle at Washington’s best-known Public Affairs firms.

From Wall Street to K Street, Cristina has set herself apart as a trusted advisor, skilled advocate, and effective negotiator who isn’t afraid of long, hard work. She began her lobbying career in 2004, immediately representing Fortune 500 clients at top-ranked, bipartisan government and public affairs firms in Washington. Her past clients include major chain retailers, spirits companies, national theme and amusement parks, pharmaceutical firms, and nutrition and wellness companies. Her policy areas of expertise include financial services, tax, trade, border security, transportation and infrastructure, and crisis management.

Featured in Washingtonian magazine in “Success Stories of Washingtonians of Latino and Hispanic Descent” and identified as a “Power Player” and “Most Influential 40 and Under Leader” in other regional publications, Cristina provides insider advice on how public policy is created and communicated. As a founding member and former President of the Hispanic Lobbyists Association and serving as the interim CEO of the non-profit Congressional Hispanic Caucus Institute (CHCI), Cristina has served as both a leader and an advocate, promoting communication, ethics, education, and bipartisanship.

Today, Cristina is active in charitable work, contributing her business acumen, political savvy, and trademark hustle as Vice-Chair of the CHCI, serving under Rep. Joaquin Castro (D-TX) and on the board of the National MS Society’s National Capital Chapter. Cristina is also on the Board of Directors for her alma mater, the Brooks School, and volunteers with Common Threads, focusing on nutrition education for children.