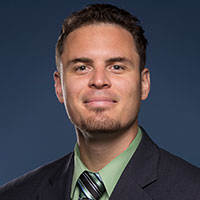 Daniel Lind is a Cuban-American from South Florida, who comes from a single-parent household and is the first in his family to graduate college. He received a Bachelor of Science in mechanical engineering from the University of Miami. In 2012, he completed his Master’s degree in automotive engineering from Clemson University’s International Center for Automotive Research in Greenville, South Carolina, where his team designed and built a complete Mazda prototype vehicle.

Daniel is an active volunteer, concurrently serving on the volunteer alumni boards of the Horatio Alger Association and for the DC chapter of the Society of Hispanic Professional Engineers. He has volunteered with CHCI since becoming a fellow in 2012 as an application reviewer, interviewer, mentor, speaker, recruiter, and collaborator with the CHCI DC chapter on local events and with CHCI on national partnerships.

Daniel is currently a Safety Compliance Engineer with the United States Department of Transportation’s National Highway Traffic Safety Administration, where he manages the federal school bus testing program and enforces Federal Motor Vehicle Safety Standards (FMVSS) for school bus and motorcoach crashworthiness safety. In this role, he oversees school bus crash testing and works with manufacturers to issue recalls when a safety non-compliance issue is found. He has been in the federal government for over 5 years, in various technical safety roles spanning investigating offshore oil and gas incidents to autonomous vehicle incidents while operating on public roads.