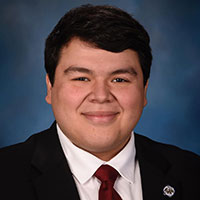 Edgar Gonzalez, Jr. was born and raised in Chicago’s Little Village neighborhood on the Southwest Side and attended Chicago Public Schools. Edgar is the son of immigrants from Monterrey, Mexico, and graduated from Harvard University with a bachelor’s in Government. Upon graduating, Edgar joined Congressman Jesus “Chuy” Garcia’s in-district constituent services staff, focusing on immigration, social security, veterans’ affairs, criminal justice and education. In January, Edgar was sworn in as the State Representative of Illinois’ 21st House District, becoming the youngest Latino to ever serve in the Illinois General Assembly, and the youngest current legislator in the Assembly. After completing the R2L NextGen program in high school in 2013, he has been a proud CHCI alum and has been engaged the CHCI alumni community in Chicago ever since.