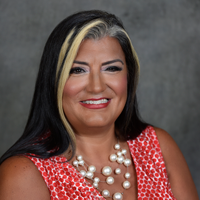 Since 2019, Evelyn DeJesus has been the executive vice president of the 1.7 million-member American Federation of Teachers, AFL-CIO, the first Latino/a officer in the union’s 105-year history.

A skilled teacher and administrator, Ms. DeJesus is a forceful advocate for justice—undaunted and unafraid to speak truth to power.

Elected as an AFT vice president in 2014, she chairs the AFT’s Latino Issues Task Force and serves as the presiding officer of the AFT Asian American and Pacific Islander and the newly created AFT LGBTQIA + Task Forces.

In 2021, she joined the executive boards of the AFL-CIO and the Solidarity Center, and became secretary-treasurer of the Labor Council for Latin American Advancement. At the AFL-CIO, she serves on the Racial Justice Task Force (and the Subcommittee on Reimagining Federated Bodies) and the Immigration Committee. She also serves on the advisory board of the Congressional Hispanic Caucus Institute.

A native Puertorriqueña who grew up in New York City’s Lower East Side, Ms. DeJesus traveled an unexpected road from engaged parent to educator and trade unionist. When one of her daughters became ill during a school construction project, Ms. DeJesus publicly exposed the toxic environment, caused by asbestos.

Her courageous whistleblowing actions led to the Great Asbestos Scandal of 1993, and a citywide shutdown of the schools until asbestos could be safely removed from school buildings.

She began her education career as a state-certified parent educator and then as an assistant director for the Even Start Program for pregnant teens, all while pursuing a bachelor’s degree. As an early childhood teacher and reading specialist, she taught for two decades in New York’s Chinatown, and has made literacy and support for multilingual learners her signature curricular issues.

Ms. DeJesus’ spirituality extends into every aspect of her life, and she credits her faith for her achievements. Ms. DeJesus is also a chaplain under the  New York State Chaplain Task Force. She is the proud wife of Louie and the mother of two beautiful daughters, Tiffany and Kristina. She has been blessed with five grandchildren.