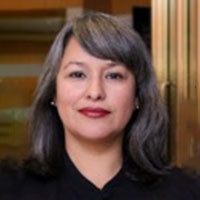 Grisella M. Martinez serves as Vice President of Government Relations at the National Association of Broadcasters where she represents radio and television broadcasters before Congress and within the media and telecom industry. She is a trusted resource for Members of Congress and their staff on broadcasting issues and has long-standing expertise on issues related to immigration, homeland security and appropriations.

She previously served as policy director for the House Democratic Caucus under Chairman Xavier Becerra (D-CA). In addition to her leadership duties, she was his liaison to the Congressional Hispanic Caucus, the Smithsonian Board of Regents, The Smithsonian Latino Center, and the National Museum of African American History and Culture (NMAAHC) Council.

She is passionate about mentorship, advocating for diversity and inclusion, and supporting fine arts and the performing arts. She currently serves on the Board of Directors for the Asian Pacific American Institute for Congressional Studies (APAICS) and GALA Hispanic Theatre in Columbia Heights.