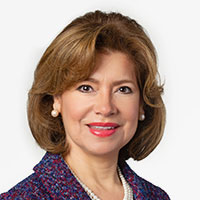 Internationally acclaimed for her insights on growth and innovation, she is also sought after for her tactical insights for American businesses from a financial and economic standpoint. Contreras-Sweet is widely praised for her contributions to global entrepreneurship.

Recognized for her creative leadership and forward leaning economic solutions, Maria’s drive to bring the SBA into the digital age, and expand into broader domestic and global markets, yielded record results in lending and contracting for American businesses.

A longtime advocate for America’s business owners and entrepreneurs, and respected champion for diversity and inclusion, job creation, economic innovation, and equal opportunity, Contreras-Sweet’s achievements in bringing efficiencies and modernization to organizations have earned her international acclaim. The Maria Contreras-Sweet Public Policy Impact Award was inaugurated at the Global Entrepreneurship Summit. She is the Founding President of HOPE, Hispanas Organized for Political Equality. Founding Director of The California Endowment, a $3 billion healthcare philanthropy. She has been bestowed with 5 Honorary Doctorates , including from Tufts University and her Alma Mater California State University, Los Angeles.