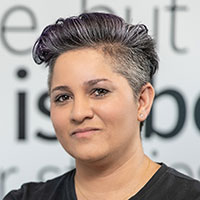 In 2013, Irma L. Olguin, Jr. decided to build a company focused on strengthening the tech industry in Fresno, Calif. and leveraging it as the economic driver to remake the city. Bitwise Industries now operates with the goal of activating human potential for the technology industry in underdog cities across the United States.

As CEO and co-founder, Irma oversees the company’s operations teams, as well as the technology-focused training program of Geekwise Academy, and software development firm, Shift3 Technologies. A main component of her role is ensuring the company’s fidelity to mission, strategy, and long-term goals.

Previously, Irma created 59DaysOfCode, a software development competition to highlight and encourage the Central Valleyʼs tech industry. She co-founded Hashtag, an open workspace for designers, developers, and entrepreneurs to collaborate. And, she co-founded Edit LLC to solve efficiency and data issues in the agricultural industry.