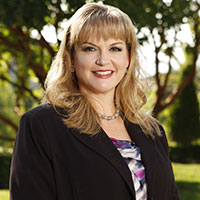 Jacki Cisneros is the vice-president of The Gilbert & Jacki Cisneros Foundation, which she co-founded with her husband, Gilbert. The foundation was formed in 2011, after the couple became winners of the California Mega Millions Lottery. With one incredible stroke of luck, Jacki and her husband were able to realize a lifelong ambition—to embark on philanthropic endeavors. The Gilbert & Jacki Cisneros Foundation is dedicated to increasing the education level of Hispanic Americans, as well as nurturing a community which supports and values the importance of Hispanic education.

Prior to her foundation work, Jacki enjoyed a successful 18-year career in broadcast journalism, covering news and entertainment in Los Angeles. She is a two-time Emmy® award winner. Jacki worked as an assignment editor at KNBC in Los Angeles (a job which led her to cover a local lottery story, only to discover that her husband had purchased the winning ticket worth $266 million). Prior to KNBC, she worked at the Fox-owned KCOP, the local CBS affiliate KCBS, and the nationally-syndicated entertainment show EXTRA.

Jacki grew up in Pico Rivera and Yorba Linda, California. She graduated from the University of Southern California, with a B.A. from the Annenberg School of Communication & Journalism. She currently serves on the board of the LA Press Club 8-Ball Foundation, which provides grants to out-of-work journalists in the Los Angeles area. Jacki has been featured in People Magazine, the Today Show and the Oprah Winfrey Show, as well as numerous national publications. She currently resides in Newport Coast, California with her husband, Gilbert, her twin boys and her Yorkie named Whisper.