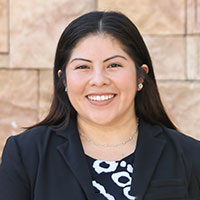 Jacqueline Perez Valencia currently transitioned to a new position as the Program Manager of the Career Ambassadors program at CD Tech in Los Angeles, CA. She previously served at the Hispanic Heritage Foundation as the Code as a Second Language (CSL) Coordinator, in which she helped introduce and teach young Latina/o students to code. Jacqueline also recently graduated from the Women’s Policy Institute State Fellowship in the Economic Security team for the Women’s Foundation of California where she had the opportunity to learn the legislative process of California state government and was actively supporting bills that helped relieve some of the hardships that under-served communities continue to face.

Jacqueline grew up in Pico Rivera, CA, and earned a B.S. in Sociology with a minor in Business Administration from the University of La Verne, where she was awarded the Campus Compact 2014 Newman Civic Fellow Award in recognition of her community and civic engagement on campus and in the surrounding areas. Her diverse experience includes working in campaigns for local/state candidates, as an immigrant rights advocate, and coordinator/administrator for non-profits.