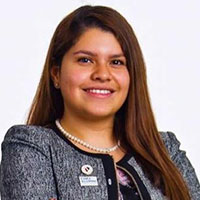 Jasmin has been advocating for the rights of her immigrant community since she was 14 years old. Growing up, she organized town halls and clothing and food drives, to ensure that her community members were not only informed about their rights but had enough to eat and clothes to wear.

Jasmin’s passion for serving the community led her to create a LULAC council at her undergraduate institution. Jasmin is the immediate past President and Founder of the McDaniel College LULAC Council. Last year, she was named the 2018 Young Adult Woman of the Year at the LULAC National Convention in Phoenix, Arizona. She is now serving as the Virginia LULAC State Deputy Director.

In college, Jasmin served as Vice President of the Student Government Association and was awarded a Benjamin A. Gilman International Scholarship to study abroad. Jasmin also sat on the board for Global Bridge, served as an admission ambassador, and was named a Newman Civic Fellow by Campus Compact in 2017.

In the future, Jasmin plans to become an immigration attorney and a U.S. Senator. She hopes to be an inspiration to young Latinas everywhere, who want to implement positive changes in their communities.