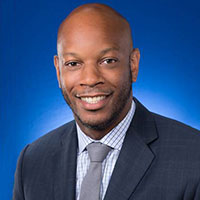 With over two decades of government and private sector experience, Jesse Price has developed a passion for putting people and public policy on a glidepath toward realizing outcomes that improve lives by building capabilities and promoting access. Throughout his career he has developed integrated strategies that have led to the closing of gaps between policy, political and grassroots objectives.
Currently serving in the Public Policy division of mobile entertainment App TikTok, Jesse is responsible for promoting and supporting related business priorities under government oversight and enhanced by grassroots partnerships as well as technology-focused advocacy organizations. His duties include executing strategies for supporting TikTok’s diverse community of content creators and users and contributing to the platform’s continuing operational capability development through engagement with policy makers.
As Senior Director for Corporate Affairs at Eli Lilly and Company – where he served for more than a decade – Jesse represented Lilly and its interests before Congress, the Executive Branch and federal regulatory agencies. While at Lilly, Mr. Price was responsible for developing and executing legislative and political engagement strategy on a broad range of bio-pharmaceutical, corporate tax, Congressional oversight and federal healthcare policy issues. With a portfolio that included serving as principal government affairs liaison to Lilly’s diabetes business unit as well as management of the LillyPAC political action committee and grassroots programs, Jesse advised Lilly’s senior leadership team on complex company deliberations. He often challenged conventional wisdom and helped shape the decision-making process in instances where opportunities and hurdles impacted not only the company, but also a broad range of healthcare industry interests.
Prior to joining Lilly, Jesse spent a career in public policy and political advocacy and organization – including experience in the White House Office of Advance and culminating in a near decade-long tenure on the legislative staff of U.S. Representative Melvin L. Watt.
Jesse currently serves on the Congressional Hispanic Caucus Institute Board of Directors and the Congressional Black Caucus Foundation Corporate Advisory Council. He is Chairman Emeritus of the Greater Washington Urban League Board of Directors.
In June 2021, Jesse was appointed by Governor Larry Hogan to the St. Mary’s College of Maryland Board of Trustees.
Jesse is a graduate of St. Mary’s College of Maryland. He resides in Washington, DC.