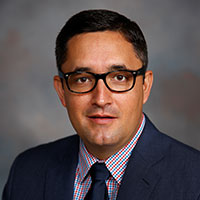 Passionate about the revitalization of Detroit and creating opportunities for youth, Joaquin Nuño-Whelan invests greatly in both the automotive industry and his efforts within the community.

Joaquin began his career at General Motors as a test engineer at the Milford Proving Ground and later embarked upon a two-year assignment in Mexico City. During that time, Joaquin helped start the country’s initial FIRST Robotics team which has now expanded into more than 60 teams. In 2011, Joaquin led the launch of the Chevy Sonic in North America as the Chief Engineer and Vehicle Line Director. Shortly after, Joaquin held assignments in both Seoul, South Korea and Sao Paulo, Brazil, where he led the launch of products in markets around the world. Joaquin and his family returned to the US in 2014, and he is now the Chief Engineer for the Next Generation Full Size SUVs, including the Chevrolet Suburban, Cadillac Escalade, and GMC Yukon.

When he is not solving global vehicle engineering issues, Joaquin invests his time in fostering education, empowerment and growth throughout the Detroit community. In the early years of his career, Joaquin volunteered with and later led the Young Engineers and Scientist (YES) Program, which mentored students in Detroit in after school STEM activities. Joaquin now serves as a board chair at the Detroit Hispanic Development Corporation, a non-profit aimed at creating life-changing opportunities for youth and their families. He also serves as the Executive Chief Engineer for the Robotics Engineering Center of Detroit, where 10 different school teams work to meet the challenge of FIRST FRC. Joaquin has expanded these programs into a STEM pipeline, utilizing robotics, mentoring and internships to propel students in Detroit into successful and meaningful careers.