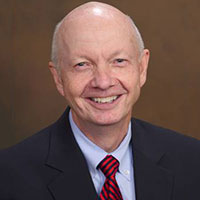 John Collingwood is Senior Vice President and Communications Executive for Public Policy State Government Relations in Washington, D.C. He is responsible for operation of the Washington office to include establishing and implementing federal legislative and objectives and strategies, related state legislative objectives and strategies, and Bank of America Political Action Committee activities. In that capacity, he directly interacts with members of Congress, senior Administration officials, and state and local elected officials. Collingwood is liaison to numerous trade associations such as the American Bankers Association and serves on the Government Affairs Council or legislative advisory panels to many at both the federal and state levels. Collingwood came to the Bank of America through the merger with MBNA, where he was Director of Government Affairs. He joined MBNA in 2002 after a lengthy career with the FBI. In the FBI he was the Bureau’s longest serving Assistant Director for Congressional and Public Affairs, for nearly 20 years being the FBI’s principal congressional and media liaison and part of the executive management team. Prior to that, he served as the Chief of the Civil Litigation Unit in the General Counsel’s Office, and Special Assistant to the Director after serving as an FBI Agent. He received two Presidential citations during his tenure there.