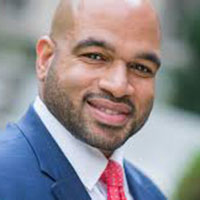 John serves as a Vice President at Nareit, the worldwide representative voice for real estate investment trusts — REITs — and publicly traded real estate companies. John previously served as Chief of Staff to U.S. Congressman Emanuel Cleaver, II (D-MO). As Chief of Staff, John was the lead political strategist for the Congressman and managed the staff in his Washington, DC and district offices. In 2017-18, John directed Cleaver’s efforts in spearheading an internationally recognized Congressional investigation of the financial technology and on-line lending industry to discover and remedy flawed and potentially biased lending practices caused by algorithms and artificial intelligence. After this investigation, John became known as one of the premier experts on the intersection between the financial services, real estate and technology industries.

Prior to becoming Chief of Staff, John served as National Security Director for U.S. Senator Charles Schumer (D-NY). Through his five years on staff, John served as Senator Schumer’s principle foreign policy strategist and was one of the Senate’s most sought after staffers on issues of international banking sanctions. Additionally, every member of the House and Senate that John has worked for has served on either the House Financial Services or Senate Banking Committee, which has provided him with a deep understanding of the complex statutory and regulatory structure governing America’s financial institutions.

John has over 15 years of Capitol Hill experience. Prior to working in Congress, John completed a tour at the Organization for Security and Cooperation in Europe based in Copenhagen, Denmark — where he was an International Research Fellow. John holds an MBA from the Carlson School of Management at the University of Minnesota, a dual Master’s degree (M.A.) in diplomacy and international relations and corporate and public communications from Seton Hall University, and a B.A. degree from Clark Atlanta University.

A seasoned political strategist, John has served in senior roles on several successful national and state campaigns. Additionally, from time to time, John serves as a thought leader and strategist for elected officials and candidates primarily in Florida, but also nationally.