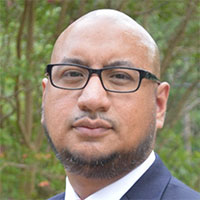 Juan M. Sempertegui serves as Assistant General Counsel & Vice President at the Bank of America Corporation (NYSE: BAC). He participated in the Congressional Hispanic Caucus Institute’s Summer Internship program in 1996 and has been featured as a speaker by a number of organizations including the Hispanic National Bar Association and the National Diversity Pre-Law Conference.

In his capacity at the Fortune 50 firm, Juan supports the company’s Consumer & Small Business Banking team on issues related to subpoenas, garnishments, and other legal orders that arise in various states across the country. He also monitors and analyses state legislation in the company’s 38 foot print states impacting Financial Centers. Juan currently serves as primary counsel to the Military Bank Overseas Division.

Prior to joining Bank of America, he served as Director of Licensing with the State of Maryland’s Division of Financial Regulation managing the licensure process for mortgage lenders, money transmitters, and other financial institutions. Juan began his legal career as a Judicial Law Clerk for the Honorable Maurice Ross in DC Superior Court and went on to litigate legal malpractice and other civil matters at a law firm in Washington, DC.

Juan is a recipient of the Leadership Award from the Maryland Hispanic Bar Association, the Edward Bou Alumni Award from the American University Washington College of Law and the 2019 Hispanic Attorney of the Year from the Hispanic Bar Association of the District of Columbia. In 2017, Juan was recognized by El Tiempo Latino, a Spanish-language newspaper for the District of Columbia, Maryland and Virginia, as one of 100 most influential individuals for the Latino community.

Juan received an Honorable Discharge from the U.S. Marine Corps, holds a Bachelors’ degree from the University of Maryland, an MBA from The Johns Hopkins University, and a JD from American University Washington College of Law.

He lives in Silver Spring, MD with his wife and three children.