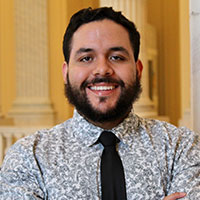 Coming from a Colombian, Mexican and Puerto-Rican upbringing, Leonardo grew up in many cities in both the Southeast and Northeast United States. At age 13, Leonardo chose to permanently live with his father and three brothers in Smyrna, Georgia. Growing up in the South, Leonardo struggled with his identity as a gay Latino. However, it was those struggles which empowered him to change his narrative and seek change. Leonardo received the Goizueta Leadership Pipeline Scholarship in 2013 and graduated from Georgia State University with a B.S. in Economics in May 2017. At Georgia State University, Leonardo gained the necessary confidence and tools to fight for his beliefs and to stand proud in being a gay Latino. Using his background in economics, Leonardo held various internship and leadership positions. Leonardo advocated for LGBTQ students in his role as a Student Government Senator, served the people of Georgia by interning for the Georgia House Democratic Caucus, and promoted affordable housing through his internship with the Federal Home Loan Bank of Atlanta. All these experiences and more has emboldened Leonardo to become an Alumni of the Congressional Hispanic Caucus Institute as a Public Policy Fellow for Congressman Jared Polis. As a fellow, Leonardo worked on LGBTQ equality, tax reform, immigration, and education policy. Now, Leonardo is serving as a Legislative Correspondent for the people of Georgia 13th in the Office of Congressman David Scott and could not be more excited to serve his community, Georgians, and Americans alike.