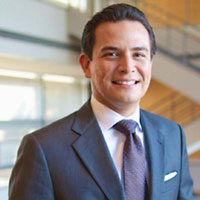 As Senior Director of Government Affairs for PEPSICO, Mr. Cruz manages State and local political and public policy activities for states in the western region of the United States.

His passion for public policy issues was cemented while working in the office of Congressman Esteban E. Torres and later as Advocacy Director of the AARP. Born in Fresno, California, he grew up in the Greater Los Angeles area. Mr. Cruz graduated from UCLA with a degree in Political Science. As an undergraduate, he served as a reserve deputy with the County of Los Angeles Juvenile Probation Department.

Currently, Mr. Cruz serves as the Vice Chair of the Board of Directors of LA Plaza de Cultura y Artes. He also serves as Board Secretary for the Congressional Hispanic Caucus Institute, and on the Board of theDream.US and the Getty House Foundation. He serves on the Advisory Boards of the UnidosUS (formerly NCLR) and the League of United Latin American Citizens (LULAC).