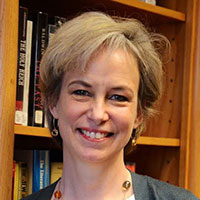 Maggie Little, PhD, is founder and Director of Georgetown University’s Ethics Lab, as well as Professor of Philosophy and Senior Research Scholar at the Kennedy Institute of Ethics. She is also a founding co-chair of the Tech and Society Initiative at Georgetown. Little oversees the growth of Ethics Lab’s work on campus, as well as among partners—from nonprofits to corporations to other academic institutions. She guides the focus of the Lab’s coursework on an annual basis, pushing her colleagues—and by extension, students—to examine the world’s most pressing, complex programs.

Her research interests include issues in reproduction, clinical research ethics, data ethics, and the structure of moral theory. A Rhodes Scholar and fellow of the Hastings Center, she has twice served as Visiting Scholar in residence at the National Institutes of Health Department of Bioethics, and was appointed to the Ethics Committee of the American College of Obstetrics and Gynecology. She is co-founder of The Second Wave Initiative, which works to promote responsible research into the health needs of pregnant women.

In her previous role as Director of the Kennedy Institute, Dr. Little oversaw a time of transformative development, including the launch of the world’s first Introduction to Bioethics MOOC in April 2014; the inauguration of Conversations in Bioethics, an annual campus-wide event focused on a critical issue in bioethics; the deployment of a series of experimental undergraduate courses utilizing project-based learning and design studio methods.