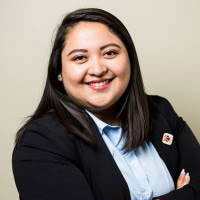 María currently serves as the program coordinator for the Hispanic Alliance for Career Enhancement (HACE) where she leads the high school and university leadership programs. Maria is a Chicago native whose parents immigrated from Mexico. She earned her B.A. in International Studies and Spanish from the University of Iowa.

Prior to joining HACE, María was a community organizing fellow at the Illinois Coalition for Immigrant and Refugee Rights (ICIRR). She led naturalization efforts in partnership with local organizations including the Mexican Consulate. She co-led the New Americans Democracy Project campaign, aimed to mobilize the immigrant vote during the 2016 elections. María is a Congressional Hispanic Caucus Institute (CHCI) alumni, after completing the congressional internship program at Congressman Luis V. Gutierrez (D – IL) DC office.

She now serves as the President for the Chicago Alumni Board of the Congressional Hispanic Caucus Institute (CHCI). She is an active member of Sigma Lambda Gamma National Sorority, Inc, and Plan Parenthoods’ Future of Choice Committee.