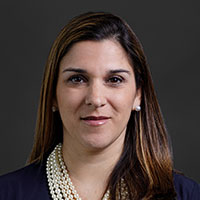 Ms. Brown is the Head of Mexico at J.P. Morgan Private Bank. In that role she manages a global team dedicated to advise Mexican families in areas such as investments, credit, planning and philanthropy. Previously, Ms. Brown headed Central Texas for the Private Bank. In this role, her and her team advised entrepreneurs, company founders, CEOs, family offices and non-profit organizations through the challenges associated with growing and sustaining their wealth over multiple generations. Before arriving to Texas, Ms. Brown was a Team Lead for the Private Bank in Silicon Valley where she helped establish J.P. Morgan as a leading wealth management provider to entrepreneurs, venture capitalists and CEOs. Previously, Ms. Brown spent 9 years in New York advising Mexican offshore clients, first as a senior banker and then as a Team Leader where she led a multinational banker team based out of New York, Miami, Houston, and Geneva (Switzerland).