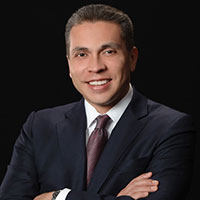 Max Espinoza is a senior program officer at the Bill & Melinda Gates Foundation.  Prior to joining Gates, he was Senior Vice President of Education Programs and Policy at Scholarship America. In this capacity Max served on Scholarship America’s executive team, advancing the organizational mission, acting as Scholarship America’s lead spokesperson on education issues, and providing strategy and operational management of the organization’s education programs, including Dollars for Scholars, Collegiate Partners and the Dream Award.  Previously, Max spent more than a decade with the California State Legislature in key leadership roles advising elected officials in the shaping of policy and fiscal priorities and served as chief advisor on higher education to Assembly Speaker John A. Pérez and members of the Assembly Democratic Caucus. In these roles he advanced equity in postsecondary education access, protected and expanded the state’s financial aid programs and shepherded other important policy changes including the enactment of “The Working Families Student Fee Transparency and Accountability Act.”

Earlier in his career Max served as an executive leader at the California Student Aid Commission where he managed over $1 billion in state and federal financial aid programs and served as President of the Chicano Latino Youth Leadership Project (CLYLP), a community based nonprofit whose mission is to enhance and build the leadership potential of California’s Chicano/Latino youth.

Max holds a BA from the University of California, Los Angeles. A first-generation college student and former scholarship recipient, he has been a passionate advocate for students throughout his career and has dedicated himself to ensuring postsecondary education equity and opportunity as a means of combatting socioeconomic inequity.