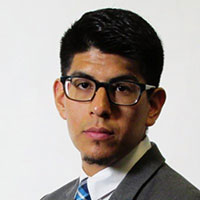 Omar Martínez González is a DACAmented, first-generation immigrant from Mexico City. He was raised on the north side of Chicago in a mixed-immigration household, and knows first-hand the barriers faced by immigrant and low-income communities. He has dedicated his professional career to bridging the access gap for undocumented and underrepresented people, coordinating college access and success programs in Chicago and Washington, D.C., creating and implementing career development programs through Northwestern Medicine, and working as an immigration paralegal specializing in family immigration law and Deferred Action for Childhood Arrivals (DACA).

Omar participated in the Congressional Hispanic Caucus Institute – Congressional Internship Program (CHCI-CIP) in the Spring of 2014, working in the office of Congressman Luis V. Gutierrez. He was then recruited by a boutique political consulting firm to work on consumer protection legislation and insular affairs, through which he represented the government of the Commonwealth of Puerto Rico to favorably amend and pass the PROMESA Act of 2016, aimed at helping the Island of Puerto Rico avert a fiscal crisis.

Omar currently serves as the Health System HIV/HCV Outreach & Testing Coordinator for the Cook County Health & Hospitals System (CCHHS), working to implement HIV/HCV testing initiatives throughout Cook County in Chicago. He is a graduate of the Illinois Institute of Technology, where he received his B.S. in Biochemistry and M.S. in Cellular and Molecular Biology. He is passionate about bridging the access gap for underserved people, developing political strategy, building coalitions, empowering communities, and continually growing as a medical and government relations professional.