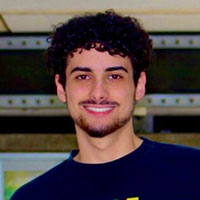 Oscar Eduardo Serra is a volunteer, advocate, and dual-enrollment student who resides in Miami-Dade County and has dedicated his time to giving back to his community. After immigrating from Cuba, he has weathered the struggles faced by immigrants and minorities in the United States, and has resolved to use those experiences to help others in similar circumstances.

As a Junior Alumnus for the Congressional Hispanic Caucus Institute, Oscar has been able to reach many people like him and create connections to further his goal of bettering his community through volunteer work and legislative action. Oscar also seeks to empower individuals who share his struggles and has done so by delivering an official TEDx speech about how he overcomes his adversities along with ways on how anyone could advocate for change in their own communities. He currently spends most of his time as an intern for a state political campaign and has plans to begin mentoring elementary and middle school students who suffer from speech impediments.