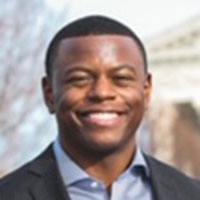 Phillip Thomas-Wallace has spent the last decade promoting public policies that enable job-creating companies to innovate, grow sustainably, and thrive in challenging markets and unpredictable regulatory environments. He currently serves as Director of US Federal Government Affairs at Walmart (NYSE: WMT), where he focuses on strengthening the company’s political relationships within the Democratic Caucus and advocating for legislative priorities before Congress.

Prior to joining Walmart, Phillip built a long track record of success in past management roles at venture capital firm Intellectual Ventures, Hyundai Motor Company, and AHRI (global trade association). After launching Hyundai’s US State Government Affairs Program, he worked with state legislatures across the country to pass new laws that criminalize the creation, sale, and distribution of counterfeit airbags—a serious interstate commerce issue that impacted the safety of American consumers. He also served on the company’s cross-functional crisis response team during a major federal investigation that led to a record joint settlement with the Department of Justice and Environmental Protection Agency. During his time at Intellectual Ventures, Phillip designed and executed smart-growth strategies for multiple start-up companies in the biotech, metamaterials, instrument fabrication, and advanced physics space—helping them to tackle public policy challenges and accelerate the commercialization of their technologies. While representing domestic HVAC and water heating manufacturers at AHRI, he notably led a coalition to pass H.R. 6582, the American Energy Manufacturing Technical Corrections Act of 2012, which was signed into law by President Obama.

A lifelong Democrat, Phillip started his career as a US Senate staffer for the Committee on Small Business & Entrepreneurship (under the leadership of former Senator Mary Landrieu) and served during negotiations and final passage of the Small Business Jobs Act of 2010, which created the Small Business Lending Fund Program administered by the US Treasury Department.

In addition to his corporate experience, Phillip is an active member of Electing a Democratic Generation (EDGE), where he regularly provides insight to Millennial incumbents and candidates seeking office. He is also a member of the Corporate Advisory Committee at the Congressional Black Caucus Foundation and is an Executive Board Member at the Washington Government Relations Group Foundation. He earned a B.A. degree in Political Science and Economics from the Nelson Mandela School of Public Policy & Urban Affairs at Southern University and a M.A. degree from the Graduate School of Political Management at The George Washington University.