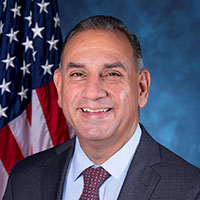 Congressman Cisneros currently serves on the House Armed Services Committee (HASC) and the House Veterans’ Affairs Committee (HVAC). He is also a member of the Congressional Hispanic Caucus, the Congressional Asian Pacific American Caucus, and the bipartisan For Country Caucus. He is staunch advocate for our national defense, our servicemembers, and veterans.

Congressman Cisneros was born and raised in Southern California and attended college on a Naval Reserve Officer Training Corps (R.O.T.C.) scholarship becoming the first in his family to graduate from college. He currently holds a bachelor’s degree in Political Science from The George Washington University, an MBA from Regis University, and a master’s degree in Urban Education Policy from Brown University.

Congressman Cisneros served as a supply corps officer in the United States Navy completing both a Western Pacific and Mediterranean deployment. He was awarded the Navy Commendation Medal, the Navy Achievement Medal, the National Defense Medal, and the Armed Forces Expeditionary Medal.

Prior to serving in Congress, He and his wife Jacki founded the Gilbert and Jacki Cisneros Foundation, which invests in college access and affordability programs for students and veterans. Jacki and Congressman Cisneros have been happily married for 14 years and are the proud parents of five-year-old twin boys.