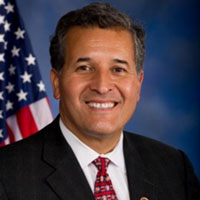 Rep. Juan Vargas attended the University of San Diego on scholarship, graduated Magna Cum Laude and received a B.A. in Political Science in 1983. In 1987, Rep. Vargas earned a Master of Humanities from Fordham University in New York City and in 1991 earned a Juris Doctorate from Harvard Law School, where he was classmates with President Barack Obama. As a young adult, Rep. Vargas entered the Jesuits, a Catholic religious order, where he worked with disadvantaged communities, including orphaned children and internally displaced people in the jungles of El Salvador. For years, his work with the Jesuits focused on the health and welfare of children and issues of social justice. Rep. Vargas was elected to the San Diego City Council on February 16, 1993. On the Council, he assumed a leadership role in planning, funding, and advocating for public safety, municipal infrastructure and schools. During his eight-year tenure on the San Diego City Council Rep. Vargas helped establish community-based policing, which has become a national model, fought tobacco advertising directed at children, and helped create the City of San Diego’ s 6-to-6 after-school program. In 2000, Rep. Vargas was elected by a huge margin to the State Assemble, State Representative to the 79th District. In his first year as a State Legislator, Rep. Vargas was appointed Assistant Majority Leader. Following the end of his term the State Assembly in 2006, Rep. Vargas went on to serve as Vice President of External Affairs for Safeco Insurance and Vice President of Corporate Legal for Liberty Mutual Group. In 2010, Rep. Vargas answered the call to return to public service and was elected to the California State Senate, and represented the 40th California State Senate District. He was Chairman of the Banking and Financial Institutions Committee and served on the following committees: Education; Business, Professions and Economic Development; Public Employment and Retirement; Agriculture; the Joint Committee on Rules; and the Select Committee on Recovery, Reform and Re-Alignment.