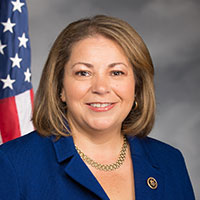 Linda Sánchez serves on the powerful and prestigious House Committee on Ways and Means. Ways and Means is the chief tax-writing committee in Congress and also plays a critical role in federal legislation on trade, Social Security, and Medicare. As a member of the Ways and Means Committee, Linda is a steadfast advocate for protecting seniors’ Social Security and Medicare, ensuring U.S. workers and their employers get a fair deal in trade agreements, and reforming the tax code to create an even playing field for the middle class.

Prior to the 116th Congress, Linda Sánchez served in a number of leadership positions. From 2011-2017, she served as Ranking Member on the House Ethics Committee. From May 2014 to December 2016, she served on the Select Committee on Benghazi. In the 114th Congress (2015-2017), Linda served as the Chair for the Congressional Hispanic Caucus (CHC), a 26-member organization dedicated to advocating for the important issues affecting our nation’s growing Hispanic and Latino community.

Linda Sánchez has served in the United States House of Representatives since 2003 and currently represents California’s 38th Congressional District. She is dedicated to reducing crime in our communities, making schools safe for all children, providing quality education and affordable health care, and cleaning up the air and water in Southern California.

Legislative Record
A co-founder of the Labor and Working Families Caucus, Sánchez has worked tirelessly to ensure that workers are safe on the job, from industrial accidents as well as from employer intimidation and retaliation. Keeping children safe online has also been a priority for Sánchez, who has introduced legislation to criminalize cyber-bullying and to reduce bullying, harassment, and gang activity in our schools. While in Congress, Sánchez has helped to expand Head Start and modernize the Higher Education Act.

Sánchez is a strong advocate for California’s families. She is committed to reducing crime, making schools safe, providing quality education and affordable health care, improving our economy by creating new opportunities, and cleaning up the air and water in Southern California. Her life-long commitment to progressive issues is reflected in her record to protect a woman’s right to choose, to protect and expand civil rights and voting rights, to promote clean energy and green jobs, and to reform the country’s broken immigration laws.

Previously, Sánchez served on the House Judiciary Committee where her work to bring oversight and transparency back to Congress received national recognition. In her previous service as Chair of the House Judiciary Subcommittee on Commercial and Administrative Law (CAL), Sánchez helped lead the Congressional investigation into the Bush Administration’s firing of nine United States Attorneys in 2006.

Sánchez’s role as a leader in the investigation of the politicization of the Department of Justice was highlighted in 2008 when she recommended that Karl Rove be held in contempt of Congress after failing to abide by a congressional subpoena and appear in front of the CAL subcommittee. Sánchez has also brought greater scrutiny to the misuse of arbitration and has worked to address the mortgage crisis through existing bankruptcy law that would help keep families in their homes.

Personal Story
The sixth of seven children, Sánchez was born in the City of Orange to immigrant parents from Mexico. She attended the University of California, Berkeley, where she earned a Bachelor of Arts in Spanish Literature with an emphasis in Bilingual Education. After working her way through school as a bilingual aide and ESL instructor, she earned her law degree from the University of California, Los Angeles.

After law school, she worked in private practice before going to work for the International Brotherhood of Electrical Workers (IBEW) Local 441 and the National Electrical Contractors Association (NECA). Prior to coming to Congress, Sánchez served as the Executive Secretary-Treasurer for the Orange County Central Labor Council, AFL-CIO. Congresswoman Sánchez is still an active and card-carrying member of IBEW Local 441.

From 2003-2017, Sánchez’s service in the U.S. House of Representatives was historic as she proudly worked with her sister Loretta, Congresswoman from the 47th District of California. They were the first sisters and the first women of any relation to ever serve together in Congress. Congresswoman Sánchez continued to make history in 2009 when she became just the eighth member of Congress to give birth while serving in office. Linda and her husband, James Sullivan, are the proud parents of Joaquín Sánchez Sullivan, and his Sullivan brothers: Brendan, Jack, and Seamus. Back home in California, she enjoys taking the family’s Miniature Schnauzers, Brooklyn and Scully, on walks along Whittier’s greenway trail and on hikes up to the Turnbull Canyon water tower.