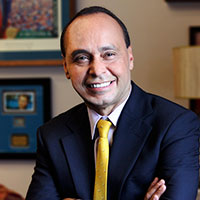 Now in his twelfth term, Congressman Luis V. Gutiérrez is the senior member of the Illinois delegation in the U.S. House of Representatives.  He is an experienced legislator and energetic spokesman on behalf of his constituents in Illinois’ Fourth District in the heart of Chicago, who first elected him to his seat in 1992.

Rep. Gutiérrez is nationally recognized for his tireless leadership championing issues of particular importance to Latino and immigrant communities.  He has been at the center of every major legislative debate on immigration reform and immigration issues for more than a dozen years.

He played an instrumental role in advocating for executive action by President Obama to provide deportation relief to certain long-term undocumented immigrants and their families.  The Deferred Action for Childhood Arrivals program that protects some immigrants brought to the U.S. as children from deportation – and a series of executive actions announced in 2014 are partly the result of Congressman Gutiérrez consistent and persistent advocacy in Washington.  But beyond advocating for these initiatives, the Congressman has worked hard in Chicago and around the country to work with immigrants to apply for these deportation protections that keep families together

Married and both a father and grandfather, Rep. Gutiérrez was born and raised in Chicago to parents who had themselves migrated to Chicago from Puerto Rico in the early 1950s. He previously served as an Alderman in the City of Chicago and has been a teacher, a social worker and a cab driver, among other diverse experiences.