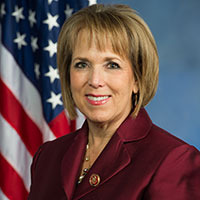 Rep. Michelle Lujan Grisham is a twelfth generation New Mexican who has dedicated her life to serving her community, fighting for seniors and building an economy that works for all New Mexicans. Born in Los Alamos and raised in Santa Fe, Michelle graduated from St. Michael’s High School, then came to Albuquerque to attend the University of New Mexico for both undergraduate and law school. Her grandfather Eugene Lujan was the first Hispanic Chief Justice of the New Mexico Supreme Court. As a young attorney she worked for the Lawyer Referral for the Elderly Program of the State Bar of New Mexico. Michelle fought to protect seniors from scam artists, safeguard them from abuse and neglect, and helped them to remain in their homes. Because of her tireless work on behalf of seniors, four-term Governor Bruce King to appointed her to head the New Mexico State Agency on Aging; she served as the state’s first Secretary of Aging and Long Term Services when the department was elevated to a cabinet position. As head of the State Agency on Aging under both Democratic and Republican administrations, Michelle implemented a system of undercover investigations while she herself went undercover to expose patient abuse and facility mismanagement happening in nursing facilities. In 2004, Michelle was asked to head the New Mexico Department of Health, where she managed over 3,800 employees and a $440 million budget.Elected in 2010 as a Bernalillo County Commissioner she hit the ground running, leading efforts to bring more transparency and accountability to county government and sponsoring new ethics standards for county officeholders, contractors, and staff.