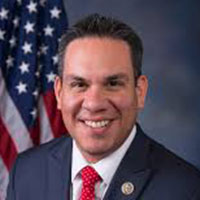 Pete Aguilar represents the 31st Congressional District of California. He was most recently re-elected in 2018 and serves on the House Appropriations Committee. In the 116th Congress, Rep. Aguilar holds the leadership positions of Whip of the New Democrat Coalition and Chief Deputy Whip in the House Democratic Caucus.

Raising his family in the community his family has called home for four generations, Representative Aguilar understands the challenges that Inland Empire families face today. He started his first job at the age of twelve, working with his grandfather at the San Bernardino County Courthouse cafeteria. He then put himself through college with the assistance of student loans and federal grants, and later established a life in public service to give back to his community.

Representative Aguilar is a voice for middle-class families throughout San Bernardino County and prioritizes legislation that will nurture a more fair economy, where everyone has the opportunity to succeed. He is committed to policies that create jobs, support our students, reform our broken immigration system, and safeguard vital programs for seniors and veterans.

Representative Aguilar previously served as the Mayor of Redlands, where he earned a reputation for his bipartisanship and steadfast commitment to making his community a better place to live, work, and raise a family. He resides in Redlands with his wife Alisha and their two sons.