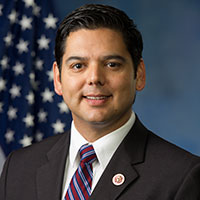 Representative Raul Ruiz, M.D., grew up in the community of Coachella, California, where both of his parents were farmworkers. Dr. Ruiz graduated magna cum laude from UCLA. He then went on to Harvard University, where he earned his Medical Degree, as well as a Masters of Public Policy from the Kennedy School of Government and a Masters of Public Health from the School of Public Health, becoming the first Latino to earn three graduate degrees from Harvard University. Dr. Ruiz returned home after completing his medical training and began working as an Emergency Medicine Physician at Eisenhower Medical Center. In 2010, Dr. Ruiz started the Coachella Valley Healthcare Initiative, which brought together stakeholders from across the region to address the local healthcare crisis. He has also worked internationally in the medical community. In 2010, Dr. Ruiz flew to Haiti immediately following the 2010 earthquake and served as the Medical Director for the J/P Haitian Relief Organization. Dr. Ruiz continued his work as an Emergency Room Doctor until he was elected to the U.S. House of Representatives in 2012. He represents California’s 36th District, which includes the entire Coachella Valley, as well as the cities of Banning, Beaumont, Blythe, Hemet and San Jacinto. Dr. Ruiz currently the only democratic doctor that serves on the House Energy and Commerce Committee.