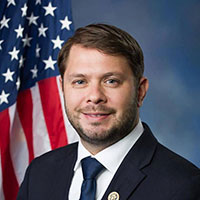 Congressman Ruben Gallego is the son of Hispanic immigrants, a veteran, and a community leader. He was the first in his family to attend college, graduating from Harvard University with a degree in International Relations. He later joined the Marine Corps, serving in Iraq with the well-known combat unit Lima 3/25.

During his first term, Congressman Gallego fought tirelessly on issues including education, job creation, access to higher education, veterans’ issues, and immigration reform. Making Arizona a better place to live, work and raise a family is his top priority.

In his first year in Congress, Congressman Gallego introduced the VETS Act, which would reduce the burden of student loan debt on veterans and has supported legislation to increase the hiring of veterans and provide additional benefits to wounded or deceased veterans and their families.

Congressman Gallego helped lead the effort to strengthen and restore the Voting Rights Act in order to ensure that all Americans have access to the ballot box. He also authored legislation to encourage gun dealers to be stronger community partners in the struggle against gun violence and to crack down on irresponsible gun dealers.