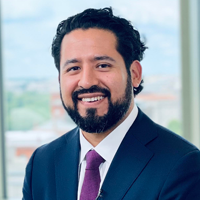 As National Director of Multicultural Business Alliance and Strategy Group for Toyota Motor North America (TMNA), Ontiveros is responsible for developing and implementing strategies to enhance awareness of the Toyota and Lexus brands among diverse consumer groups across TMNA’s business units.

As Senior Manager of Consumer Engagement, he is tasked with developing, cultivating, and overseeing a portfolio of strategic national partnerships that include Hispanic, Asian American, LGBTQ, and the Millennial demographics to ensure continued growth in TMNA’s community outreach.

Prior to joining Toyota at the end of 2017, Ontiveros was previously Vice President of Corporate Affairs for the U.S. Hispanic Chamber of Commerce (USHCC), which he joined in 2013. During his tenure with USHCC, Ontiveros managed the organization’s alliances with Fortune 500 companies, scaled small businesses, federal government initiatives as well as partnerships with other diverse national chambers of commerce and minority small business groups such as the National Minority Supplier Development Council (NMSDC) and Women’s Business Enterprise National Council (WBENC). His portfolio at the USHCC included enterprises in the telecommunications, energy, financial services, insurance, construction, logistics, transportation, and healthcare sectors.

A native of Southern California, Ontiveros graduated with a Bachelor of Arts in both literary journalism and philosophy from the University of California, Irvine.