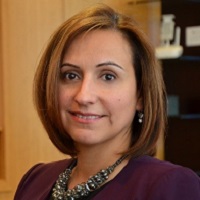 Virginia Zigras is the Vice President of Legislative Affairs at Charter Communications having recently joined their team after serving as Vice President of Government Relations for NCTA – the Internet & Television Association. Prior to entering the private sector, she spent nearly a decade in government, including serving for 3 CHC Members: Rep. Tony Cardenas’ personal office, Rep. Luis Gutierrez’s personal office, and Rep. Jose Serrano’s Appropriations Subcommittee on Financial Services and General Government. Most recently, she served as Chief of Staff to Rep. Tony Cardenas during which time he became Chairman of CHC BOLD PAC, the political arm of the Hispanic Caucus. Virginia was instrumental in helping Chairman Cardenas grow the PAC to one of the largest and most influential member-led political organizations in the country. She received her LL.M. from American University, Washington College of Law, her J.D. from Western Michigan University Law School, and her B.A. from York University.