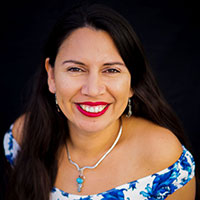 Wendy Ramirez is sharing her gifts doing what she loves, designing, traveling, teaching, coaching and giving back to her community. Wendy is the founder of INTIMALENA, a fashion brand that promotes Latino culture, creates jobs, and helps indigenous communities in Latin America. She also supports Latina professionals transition careers, discover and share their gifts. Her passion lies with connecting Latinos in the US with their culture, language and with Latin America. She is also the founder of Spanish Sin Pena, a fun and interactive program where Professional Latinos are learning Spanish and traveling to Latin America. Wendy previously served as a program manager for the National Democratic Institute for International Affairs (NDI) in Washington DC where she supported programs in Latin America to strengthen political and civic organizations, safeguard elections, and promote citizen participation. Prior to joining NDI, she served as a Senior Legislative Assistant for former U.S. Congressman Xavier Becerra where she developed legislative proposals and made policy recommendations in the areas of immigration, education, foreign affairs and international trade. Wendy arrived to DC as a Congressional Hispanic Caucus Institute (CHCI) law fellow. Earlier in her career, she worked in the legal departments of the Children’s Rights Project and the Legal Aid Foundation of Los Angeles. Wendy was also an elementary school teacher and taught law courses to high school students. She earned her JD from Loyola Law School Los Angeles as a Public Interest Scholar and Bachelors of Arts in Political Science from the University of California at Berkeley. Wendy is a native of Los Angeles, CA, has studied abroad in India, Mexico and Spain, participated in professional development and exchange programs in Colombia, Spain, Belgium, Brazil, and Israel. She is fluent in Spanish and English with basic knowledge of Portuguese.