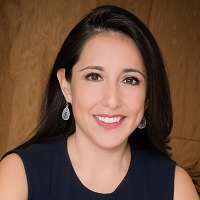 Zuraya Tapia-Hadley currently serves as Senior Director of Government Affairs for TelevisaUnivision (TU), the leading Spanish-language media and content company in the world.

Prior to TU, Zuraya was Manager of Public Policy for Meta (Facebook), where, first, she led engagement with Members of Congress as part of the Federal Government Affairs team, and later joined the External Affairs team, where she was responsible for managing relationships with national advocacy groups across a wide array of constituencies, including national Latinx, Asian American and Pacific Islander, women’s, and LGBTQ+ groups.

Previously, she served as a Principal at The Raben Group, where she advised U.S. and international clients in the non-profit and private sector on how to navigate the Washington, D.C. political and policy arenas, develop engagement strategies with communities of color, and improve diversity and inclusion strategies. She started her lobbying career as Vice President, Government Affairs for UPS, where she advocated on Customs and trade issues in the U.S. and Latin America and developed outreach strategies with national Latinx organizations.

Zuraya has been a frequent commentator on issues of politics, justice, and immigration on CNN en Español, Univision, Telemundo, and NTN24. She began her career as an International Trade attorney at Pillsbury Winthrop Shaw Pittman before moving into public policy and organizational management. Her previous experience includes serving as staff in the U.S. House of Representatives for the Committee on Small Business, a tenure as Executive Director of the Hispanic National Bar Association (HNBA), and Director of the Mexican American Leadership Initiative of the U.S. Mexico Foundation. She has been named one of the “Latina Leaders to Watch” by the Congressional news publication “TheHill”, and one of the “Top Latinos Under 40 Impacting Foreign Policy” by the Huffington Post.  She also served on the Virginia Latino Advisory Board, appointed by both Gov. Tim Kaine and Gov. Terry McAuliffe.

Zuraya earned a Master of Laws (LLM) from Georgetown University in International Law and is licensed to practice Law in Mexico after earning her undergraduate degree in law from the Universidad de las Americas Puebla in Puebla, Mexico.