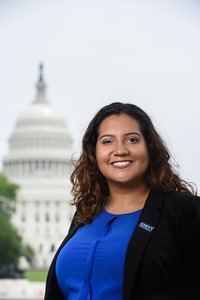 Angelica Duque is a first-generation Colombian-American who hails from White Plains, New York. Angelica was raised by a single mother, and together, they have had to overcome discrimination, job loss due to the recession, and escape violence in Colombia. Despite all their struggles, they are emboldened by the promise of progress and success through education.

A rising senior at the University of Miami, Angelica is finishing her major in Political Science with minors in Italian, Latin American Studies, and International Studies. She will study abroad in Buenos Aires and Rome to refine her language and diplomacy skills. Angelica’s passions lie in encouraging women’s political participation rates, promoting youth engagement, and defending the rights of communities of color.

Before enrolling in graduate school for a degree in public policy or administration, Angelica would like to work on campaigns for the 2020 elections. As a Congressional Hispanic Caucus Institute intern, Angelica hopes to learn how to empower marginalized communities through policy and legislation.