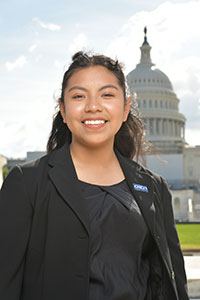 Brenda Santiago-Ramos is a Kansas native and the daughter of two Mexican immigrants. She is the oldest of three, having two younger brothers. From early on, her Mexican-American identity lured her to be interested in global affairs and U.S. politics. She now attends George Washington University (GWU) as a Cisneros Hispanic Leadership Institute scholar, pursuing a B.S. in International Affairs and International Business. At GWU, Brenda has involved herself in immigration and health research as a research assistant for the Cisneros Institute. Also, she is the Vice President of Philanthropy for Sigma Iota Rho, the Elliot School of International Affairs honor society. In D.C., she’s become involved in the Latinx community by working with the Latin American Youth Center communications department.

As a CHCI Intern, she hopes to gain insight and guidance from influential Latinx professionals in D.C. and around the country. Brenda also wants to utilize this internship to show Latinx students back in Kansas that they can also pursue higher education and seek opportunities like the ones CHCI provides. Brenda credits her successes to her diligence and her family’s support, who never fail to repeat this dicho to her: “yo no vengo a ver si puedo, sino porque puedo vengo.”